Montreal is a year-round global capital of celebration. The world’s second-largest French-speaking city (after only Paris) is famous for its cosmopolitan flair, cuisine, fashion, as a UNESCO City of Design, the birthplace of Cirque du Soleil - and a full calendar of top-shelf festivals that wrap the city in energy anytime you visit.
A famously active winter city, Montreal’s star shines even when the temperatures fall, with a mid-winter ‘Nuit Blanche’, ‘Igloofest’ and active celebrations of the city, like giant outdoor skating rinks.
Summer is high festival season, with marquee events like the Canadian Formula One Grand Prix race which is the most watched F1 race in the world, the world’s largest comedy festival, rock and electronic music fests, the Montreal World Film Festival, just to name a few.
Most summers, that includes the Montreal Jazz Festival, the Guinness World Record-holding celebration of jazz music that transforms the city’s Quartier des Spectacles, or festival neighbourhood, into the world’s biggest jazz club with thousands of performers from dozens of countries, including today’s jazz legends as well as tomorrow’s. 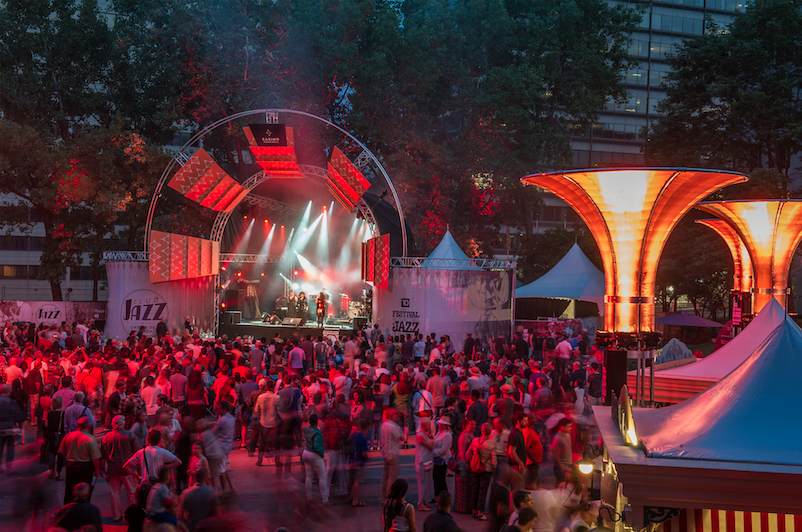 © Benoit Rousseau - Festival International de Jazz de Montréal
In 2021, a smaller Montreal Jazz Festival took place in September – highlighting the irresistible appeal of open-air events as we start traveling again.
And it highlighted perhaps the very best time to visit Montreal – during the Fall, when warm sunny days and crisp nights are tailor made for enjoying the city outdoors to its fullest.There’s Montreal’s version of Oktoberfest in its Beer Festival,MUTEK, an exposition combining electronic music and digital art, MOMENTA, Montreal’s Biennale of photography and image art, even a two-part video gaming extravaganza.
But one literally 'outshines' them all.

For weeks at the height of the best fall weather in September and October, Montreal’s Botanical Gardens are transformed into pure enchantment. Three gardens: Chinese, Japanese, and First Nations, are set aglow with light and magic.
Glittering lanterns in different shapes, styles and sizes glitter along paths through the dynamic and uniquely styled gardens, illuminating not just your way, but providing an authentic gateway to three of the world’s great cultures.
The beloved annual spectacle draws thousands who come to be immersed in inspiration and culture, and the best time to visit includes the late afternoon sun, blooms and fall colors, that transition with sundown to a different world that pays homage to the rising moon.
In fact, one of the central – and very Canadian- experiences is an interactive, lunar installation that captures the relationship between humans and Nature. Under the real moon above, and in the reflection of a illuminated moon installation, you’ll hear wolves howling – and if you howl, too, it makes the illuminated moon grow bigger.It takes a nocturnal experience out of the playbook of camping in Canada’s north country – responding to the howling wolves – and makes it into art that highlights dialogue between humans and Nature.

The illuminations in the First Nations Garden grow out of the actual, giant poplar tree that’s the dominant feature of the garden, and labelled the Sacred Tree.On and around the Sacred Tree, the light installations portray the birth and fading of seasons and Nature’s constant transformation.
To add to the primal experience, the light show is played against a projection of fire and to the evocative soundtrack of a human heartbeat.

The Chinese Garden: Legend of Pangu

There’s a long cultural tradition of lanterns in China, making the magical silk lantern installations in this section of the Montreal Botanical Gardens both a natural fit and a fabulous transformation.
The Gardens of Light here recreate in dramatic illuminations the Chinese fishing tale of the mythological creature Pangu, who is accompanied by four more creatures representing the four compass points. The black tortoise for North, the red bird for South, blue dragon for East, and white tiger for West.

The Japanese Garden: Zen by Light

Where the Chinese Garden is dramatic, the Japanese Gardens by Light are meditative and understated. An illuminated path begins to glow as the sun sets, with the unmistakeable shapes of Japanese garden features reborn in peaceful lighting.
True to ancient Japanese culture, the illuminations pay homage to the changing seasons and highlight, rather than mask, Nature, enhanced on certain nights by live music.
Montreal’s Gardens of Light may be one of the most magical ways to celebrate autumn outdoors in one of the most dynamic cities in the world.

By: Lynn Elmhirst, Producer/ Host BestTrip TV
Image credits as noted.
Copyright BestTrip.TV/Influence Entertainment Group Inc or Rights Holder. All rights reserved. You are welcome to share this material from this page, but it may not be published, broadcast, rewritten or redistributed.

Smart selfie-taking isn’t about how to use your camera, or how to compose a nice shot that doesn’t make your nose loo... learn more

Even if you’ve never considered taking an escorted or guided tour before, this might be the best time to see why more... learn more

New Zealand is opening again to international visitors at the beginning of May, 2022, and for outdoor travel lovers, ... learn more

7 Top Caribbean Destinations to Ring in the New Year

Can you imagine a better way to greet the New Year than on a tropical beach in the Caribbean? Plan ahead to make... learn more