Where to Find Mexico’s Most Famous Art Scene

While it was founded in the 1500’s by a monk, and its colonial center has been declared a UNESCO World Heritage Site, San Miguel de Allende as a famous art colony dates from the Second World War.
Just half a day’s drive from Mexico City in the Colonial Highlands, San Miguel is 6000 feet above sea level in Mexico’s high sierra, with cool, comfortable temperatures and clear mountain air year round.
After the war, US veterans covered by the GI Bill started coming to the city to study in its noteworthy school of fine arts, the Allende Institute. Artists, musicians, a host of culture creators took root in San Miguel, as well as expats and travelers who supported the growing cultural community.
Today, San Miguel still has a famously rich arts scene, based on a critical mass of thriving art galleries, an abundance of live music and theater, and an engaged community that participates and supports the city’s unique creative lifestyle.
That also makes San Miguel a famous shopping destination, especially for modern and folkloric art, so plan ahead with space in your luggage when you visit a town that’s frequently named ‘Best Small City in the World.’ 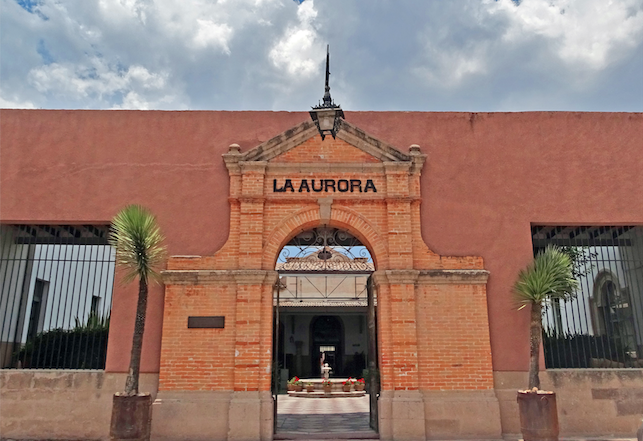 The streets of San Miguel de Allende are lined with more than 100 art galleries — Canal 3, El Nuevo Mundo, La Casa del Inquisidor and Mixta, to name a few — featuring everything from modern and contemporary art to works by local artisans and indigenous peoples from around the Americas.
Both local and expat artists can often be found busy at work in their studios, and new exhibits showcasing contemporary art as well as practical design arts including furniture and interior design, antiques and jewelry, and linens and home accessories. Some artists — such as Merry Calderoni, whose study is located at La Aurora Factory — will even invite guests to take an impromptu class with them.
In fact, any visit to San Miguel de Allende must include La Aurora Factory. The art and design center fosters the work of many artists and brings a critical mass of artistic sensibility together. After years of functioning as an important part of the regional textile industry — some of its historical machines and pipes are still on display — La Aurora Factory now houses art studios, jewelry and design stores, antique shops, a couple of restaurants and cafes, and some 50 galleries.
We’ve mentioned jewelry twice already, and we’re going to do it again. With a history tied to silver mining in Guanajuato State dating back to the 1700s, jewelry design and shopping remains part of the essential San Miguel de Allende arts and crafts experience. Don’t miss Cerro Blanco at La Aurora Factory as one of the most reliable for one-of-a-kind items. This family-run store is led by the fourth generation of local jewelry makers.
If you visit San Miguel this winter, you’ll have a chance to see the works of one of the city’s most recent artists in residency. Surrealist artist Pedro Friedeberg’s “The Anti-Social Networks” exhibition is currently being displayed at the Dôce 18 Concept House until January 2022. The 40-piece exhibition examines modern society and its need for social media. Friedeberg is known for his surrealist work filled with lines, colors and ancient and religious symbols.
His best-known piece is the “Hand-Chair,” a sculpture/chair designed for people to sit on the palm, using the fingers as back and arm rests (pictured, top.)
One of San Miguel de Allende’s most popular artworks are the oversized puppets that take part in every celebration in the city and have become popular in weddings. At the Mojigangas 62 shop, you’ll find the local master of that ultra-local artform. Hermez Arroyo is credited for the renaissance of the giant papier-maché figures that sit atop people’s shoulders in local parades and festivals. 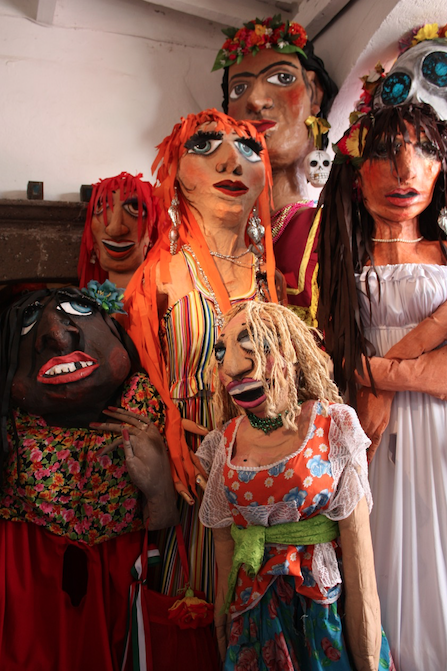 The store features a packed assortment of unique Mexican handicrafts, but make sure to schedule a class with Arroyo to create your own mini-Mojigangas — a unique souvenir you will not find anywhere else in the world.
Every winter, Canadians, Americans and Europeans flock to San Miguel for the climate, the lifestyle and the robust art culture. Isn’t it time you joined them?

This Old Ship is the Caribbean's Great New Dive Destination

Chicago’s ‘The Bean’ sculpture is already one of the most popular attractions in the city. Officially titled ‘Cloud G... learn more

They are a calm oasis in the heart of the hustle and bustle of an airport, and among the few places where air travel ... learn more

Canoes have become the ultimate symbol of Canada’s sub-Arctic indigenous people. Living where there are more freshwat... learn more